As a result of their long-term partnership, CHAMP Cargosystems and Air Cargo Belgium have decided to launch an innovation platform to support innovation within the air cargo community.

The goal is to give access to stakeholders from the Air Cargo Belgium community to share information, ideas, and best practices with the objective to foster innovation. This effort will bring broader collaboration among members to firstly benefit the Belgian community and secondly the wider air cargo industry.

Please fill in your e-mail address. 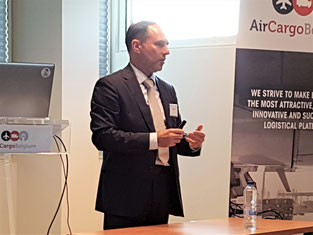 “Switching to e-AWB is one of the initiatives to grow into an efficient airport,” said Alban François AWB secretary and chairman of the organisation’s e-freight working group. Brussels Airport has been part of the IATA e-AWB 360 programme since the beginning of this year.

ACB had invited Stéphane Noll, IATA’s Regional Cargo Manager Europe to highlight the importance of the e-AWB in the air cargo value chain. In 2016, aviation carried 52 million freight tonnes at a trade value of 6.8 trillion USD, Stéphane said. “The key drivers for air cargo are safety, speed, reliability (due to the slot system) and connectivity. Air cargo also offers direct access to land locked countries, some of whichever have no access to international waters.”

“An IATA study has revealed that countries with more developed air cargo connection and smarter borders are more integrated into the Global Value Chains. So the air cargo customer experience through BRU will be critical to connect global markets to power the Belgian economy.”

Europe is lagging behind
Last June the air cargo industry produced more than 2.3 million air waybills, 75% of which were generated in Europe, Asia-Pacific and North-Asia. On the legally feasible trade lanes, e-AWB penetration was 50.1%. With a penetration rate of 38.8% Europe was still lagging behind compared with North-Asia (62.6%), Asia-Pacific (50.1%), the America’s (46.2%), Africa (67.6%, entirely due to Johannesburg Airport and the dominant position of SAA) and the Middle East (72.1%). In Belgium, the penetration rates mirrored the European one.
The e-AWB 360 programme is based on three pillars: Single Process, Airport SOP (Standard Operating Procedure) and Communication. ‘Single Process’ implies that all the stakeholders in the air cargo supply chain adopt the same course of action when delivering cargo.
This Single Process is the base on which the SOP is built. The SOP is a set of directives and principles to which carriers, freight forwarders and ground-handling agents have to commit themselves with import, export and transit consignments. ACB’s e-freight working group has dedicated a full year’s work to set this up. The SOP was disseminated in the BRUcargo community for feedback.

Twelve participating airlines
Eventually 12 airlines have agreed to join the programme: Air Canada, Air France, American Airlines, Brussels Airlines, Cathay Pacific, Delta Air Lines, Finnair, KLM, Lufthansa Cargo, Qatar Airways, Swiss and United Airlines. This SOP was introduced to the community on 31 August last year and was finally ratified by the Board of ACB exactly a year ago, on September 4, 2016.
Coordinated and synchronized communication will ensure that e-AWB is the preferred means for shipping cargo from eAWB360airports, among which BRU.

E-Freight will be next
“E-Freight will be the next step,” said Alban François, “taking the paper completely out. Our mission is to replace end-to-end paper documentation by electronic data exchange and our vision consists in being a pioneer for paperless communication & documentation via a community driven approach.”
For ACB, which celebrated its 1st anniversary on 4 September, the SOP and the inclusion of IATA e-AWB 360 are among the key realizations of 2017. Next year is expected to bring also the E-Pouch, E-Messaging and the E-Corridor. ‘The ultimate ambition is an e-AWB penetration of 85%, said Alban.